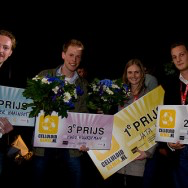 In 2009, the Celluloid Remix contest took place, with the aim of remixing old video material from the Dutch Filmmuseum. The aim of my video was to show the difficult working circumstances in the early 20th century Dutch coal mines. Circumstances which still exist to this day in some coal mines. For my video, I used old film footage of Dutch coal mines, remixed them, and created my own animations in Adobe After effects. With this video, I won the third prize of the contest!